A few years ago there was a book written by Malcolm Gladwell called ‘The Tipping Point’. I kept hearing about it and wanted to know what the fuss was about so I got a copy.

The book sets out his theory as to why some ideas catch on – whether that’s in fashion, business, music or health – and why other ideas splutter and fail. What is it that takes things to ‘The Tipping Point’ where a trend suddenly explodes in popularity?

Reading the book my mind would flip from thinking ‘this book is bloody brilliant’ to feeling Basil Fawlty would call it ‘Specialist Subject : The bleeding obvious.’

Either way the term tipping point started to crop up in articles about sport, politics, business, everywhere really, to describe situations where after a certain (tipping) point things get easier.

Since Rhys had his SDR in the summer I’ve thought several stages might be the tipping point – that things would suddenly get easier for him and flow a bit more.

As the autumn has progressed I’ve started to think that there probably isn’t one. That’s not because things have gone wrong, more the realisation that the recovery from SDR is a gradual process achieved day by day, inch by inch.

The temptation when posting on here is always to just post video clips of Rhys doing well. Whilst I’m the first to celebrate his triumphs doing that might give the impression that the recovery just happens, which isn’t really the case. There’s a fair bit of grind to it which largely explains the absence of posts.

It’s now 8 weeks since Rhys had surgery in St Louis on his heel cords to lengthen them and it seems very, very distant. In fact, if it wasn’t for the scars on his calves I’d swear it hadn’t happened at all. 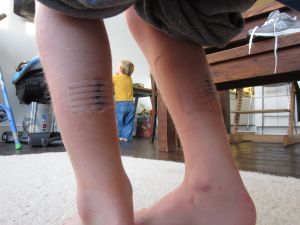 We flew home just a few days after this round of surgery and whilst it was good to be back at home it did have it’s drawbacks. Rhys was once again less able than he had been and being in familiar surroundings seemed to exaggerate that lack of ability. Not being able to climb the stairs at home was much more frustrating than being in a wheelchair in St Louis.

That, combined with the tiredness of travelling, wearing ankle splints and the mood swings the pain medicine caused meant that he wasn’t very happy – especially with me.

It made me realise that all this frustration had happened on our first trip to St Louis but it had largely passed by the time we returned a month later – in a way we’d left all the frustration in St Louis – whereas this time we’d brought it all home with us.

Another similarity with our last trip was that as Rhys’ pain passed, his ability came back up and with that his confidence began to return. That confidence combined with treadmill walking, stretching, splinting, cycling, horse riding, swimming and 3 or 4 physio sessions a week has had an impact. Here’s a video clip of him on the treadmill last week.

Out of that list of activities it’s hard to know which is having the most impact on his recovery. All I know is that if you try and do all of them Rhys improves – do nothing and his old walking patterns will start to emerge.

Listing all the therapies we’re doing reminds me of a quote I read over the summer from David Brailsford. He’s the head of the British Olympic cycling team and put their success down to ‘the aggregation of marginal gains’. Though it’s a nerdy phrase I quite like it.

The idea is that lots of small improvements (such as the electrically heated “hot pants” that kept the leg muscles of Chris Hoy warm between the races, inspired by Formula One’s tyre warmers) add up to give you an advantage.

Now even though Rhys isn’t wearing electrically heated underpants to school (not yet anyway) that idea of making ‘marginal gains’ seems closer to what we’re doing than any ‘tipping point’. Day by day we make tiny notches of progress which over weeks and months should add up to something.

Every now and again Rhys unconsciously puts everything from his physio sessions together. He’ll walk out of a shop and his arms will drop to his sides, his posture improves, there will be little in toeing, a nice ‘heel toe’ gait and you think ‘that’s it, that’s it, keep it, keep it’ and then 10 seconds later it’s gone again. You kind of get a glimpse of how well he can make his body move before the old habits return (but still better than pre surgery). Have a look at this clip of him walking in the gym last week.

I hope that this post doesn’t sound like whinging – it’s not intended to – it just feels like only posting a clip of Rhys walking nicely without an explanation would be a bit deceiving. I feel like I have to acknowledge that the rehab process is every bit as hard as I thought it might be. In order to do all the physio sessions we’ve had to call in a lot of favours from friends and family to help look after Owen. There’s also been countless times I could have chewed the steering wheel off the car when stuck in traffic on the way to and from sessions. And there’s the off days where Rhys will fall several times between getting out of the car and walking through the school gate. So while you know you chose to go for the surgery the repetition of the recovery can be quite tedious – I know other SDR families feel the same.

In all the guidance notes given to us about SDR we always knew that the recovery happens over a 2 year period, with the first 6 months the most difficult. Maybe you unconsciously hope that you might find a shortcut or a loophole to jump through so you can accelerate the process. In truth, the timeframe given by St Louis is proving to be pretty accurate and Rhys is doing well. Here’s a video clip of him on his scooter.

So for all the tiredness, frustration and traffic jams we haven’t lost sight of the fact that Rhys is making rewarding, steady progress. And for that we are very, very grateful.

19 thoughts on “The Tipping Point”